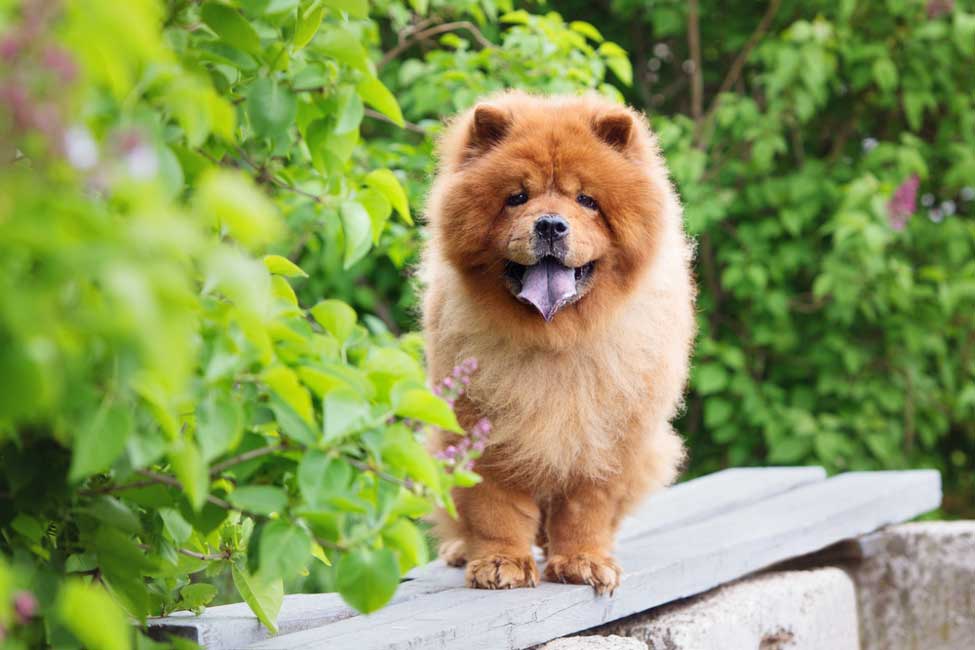 There’s no mistaking a Chow Chow! These iconic dog breeds have so many unique characteristics, they’ll never get mixed up with another breed. Both handsome and formidable, with slightly-wrinkled faces and an impressive lion’s-mane ruff. Most know they originally came from Asia, and that they have an unusual blueish tongue, but there are more interesting secrets to discover! From famous owners to their less-than-legendary swimming skills, read on for ten fun facts about Chow Chow dogs.

Things You May (Or May Not) Know: Top Ten Chow Chow Facts

A Chow By Any Other Name:

In the 18th century, the English used the term “Chow Chow” the way we might use “knickknack” today. Anything new and unusual with Eastern origins was likely to be labeled with the term. Derived from the Mandarin Chinese “Cha,” it means mix or mixed. They called all furniture, clothing, food, etc. coming from the East “Chow Chow.” When the breed first arrived by ship to England, importers simply referred to them using the same term.

And Two to Grow On:

An adult human normally has 32 teeth. This number sounds pretty impressive until you compare it man’s best friend, who usually has 42. The Chow Chow has the unique distinction of having two extra teeth in puppyhood. These extras will fall out as the pup grows their adult set in.

Most Prefer to Stay High and Dry:

One important fact about Chows that owners should know pertains to their dislike of water! While these dogs have a strong breed history as working dogs in their native China, they didn’t work on the riverbanks or shorelines. That’s because one of their signature features – their uniquely fluffy “double coat” – proves to be a hazard in the water.

Imagine jumping into a pool in a swimsuit. Now imagine jumping into a pool wearing a full set of clothes and an ankle-length fur coat! Neither of which you could take off. The double coat absorbs water and weighs down a swimming Chow, leading to potential drowning dangers if left unattended. If a Chow is heading for a boat ride, experts strongly suggest bringing an appropriately-sized dog life jacket.

They Have Some Famous Fans:

Certain breeds are indelibly linked to famous people – Queen Elizabeth’s Corgis, for example. Chows have some unusual celebrity owners in their history, including the “Father of Psychology” himself, Sigmund Freud. The most famous of Freud’s Chows was Yofi, who would routinely sit in on Freud’s therapy sessions with patients. he would even signal the session time was up by walking to the door.

Other Chow-loving celebs include homemaking maven Martha Stewart, actor Clark Gable and even President Calvin Coolidge. Walt Disney himself famously owned a Chow, which was given as a puppy to his wife, Lilly. Walt tucked the puppy, Sunnee, into a hatbox and gave it to Lilly as a Christmas present. Her surprise and delight later inspired the scene in the animated Disney classic Lady and the Tramp, as Lady emerges as a puppy on Christmas morning.

A Dog That’s The Cat’s Meow:

Chows are unique among most popular dog breeds for being aloof and standoffish. Rather than rushing to greet owners at the door or straining at their leashes to greet other dogs. They’re more likely to hang back and observe, almost in a feline way.

They are not as affection-motivated as some canines. While they can and do appreciate a good scratch behind the ears, one might have more luck enticing desired behavior and socialization with treats. This also means they’re an excellent companion for would-be pet owners interested in a pup with an independent personality and soft temperament.

They’re Lone Wolves – In a Sense:

Some dogs bond heavily with a single person, preferring to spend the majority of their time with that lucky individual. For Chows, this is a way of life! It’s this single-minded devotion that gives them a reputation for being fiercely protective. And also why socialization is so important for this breed.

Experts recommend starting socialization as early and often as possible with Chow Chow puppies. They tend to isolate and become distrustful of all unfamiliar visitors to the home unless care is taken with training. As the breed was originally bred to be hunting dogs, dog owners should also be very cautious about introducing a Chow to a home with small animals, like cats. Like bringing a bird dog into a house full of ducks, natural hunting instincts may drive them to chase and harass anything smaller than they are.

They Have a Straight-Legged Gait:

One of the fun facts about Chow Chows is their very visually intriguing walk. Their natural fluffiness, their curly tail bobbing, and of course their unmistakable “stilted gait.” Chows have straight back legs that do not bend the way most breeds do. They walk in a way that almost resembles ballerinas en pointe. When observed in a particularly fluffy rough-coated Chow, the effect is memorable. This also means that owners have to be particularly careful to watch for the signs of hip dysplasia in older Chows.

They’re Not The New Kid in Town:

While most breeds derive from a handful of cross-breeds, Chow Chows are thought to be one of the original breeds. This means not crossed with anything else but the true embodiment of purebred dogs. When humans first began to domesticate wolves and wild dogs, some dog experts believe the Chow was a result of those first tentative human-canine steps.

The breed’s fluffy coat and upturned tail certainly point to wolfish similarities. Like similar breeds, the Samoyed and Malamute, the Chow is undeniably lupine. Chows have been a part of recorded history since, and perhaps even prior to, the Han Dynasty of China in 206 B.C.

Let’s not forget on of the most interesting facts about Chow Chows! While most canines have a reddish-pink mouth and tongue, the Chow’s are a deep black-blue color. The only other dog that shares this oddly-colored tongue trait is the Shar-Pei, a fellow Asia-derived breed. The blue color is completely harmless, though an obviously-untrue urban legend maintains that Chow’s tongues are actually poisonous! This old wives’ tale comes courtesy of the Chow tongue’s resemblance to that of the venomous Australian Death Adder snake, a fellow blue-tongued creature that actually is harmful.

A Coat of Many Colors:

Chow Chows actually come in a surprising number of coat colors other than their usual red. They may have deep black, “blue” (a deep dove grey), cinnamon (a warm brown), or cream-colored coats as well.

In addition, their coat qualities may be “rough” with a lot of volume and fluff or “smooth” with a more sleek look. Blue Chows are some of the most sought-after and prized, as they were once very rare and only found in places like Tibetan Monasteries. The beauty comes at a price, however. Owners are encouraged to brush rough-coated Chows daily to prevent mats and excess shedding. A specially-formulated, pooch-safe product – such as a natural leave-in conditioning spray for dogs – may be the perfect solution to keeping your Chow tangle-free!

The Fascinating Chow Chow: Caring For Your Unique Pooch

A stately, beautiful breed of dog, Chow Chows are a product of their long lineage. They’re both visually stunning and very set in their ways without patient training. Content to keep their own company, they do well as “only” dogs in a household. This means they should be heavily socialized to encourage positive behaviors and temperaments. Inviting one of these black-blued tongued canines into your home means filling it with an unmistakable personality. It also means an impressive coat of fluffy fur! So would-be Chow owners would do well to stock up on both admiration and a lint roller or two.

Best Foods for the Chow Chow: 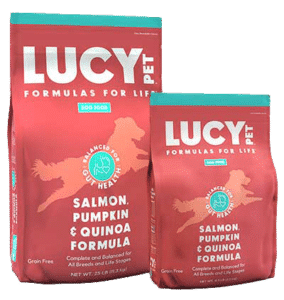 When it comes to caring for your Chow Chow’s unique beauty – including their thick double coat – it’s important to understand that your pup’s health goes beyond regular grooming and trips to the vet. As pet owners, it’s our responsibility to provide them with healthy and nutritious food. This will ensure not only their well-being and longevity but the optimal quality of life. Consider a lean protein, nutrient-rich dog food like Lucy Pet Formulas For Life™ dog food to support your pup’s overall health. This also maintains a thick and shiny coat and healthy skin. Precisely formulated to promote canine gut health and better digestion, you can feel great about feeding your four-legged family member with the finest Chow Chow dog food available. And take comfort in knowing you’re giving him his best life!