Previous Next
10 Interesting Facts About Schnauzers 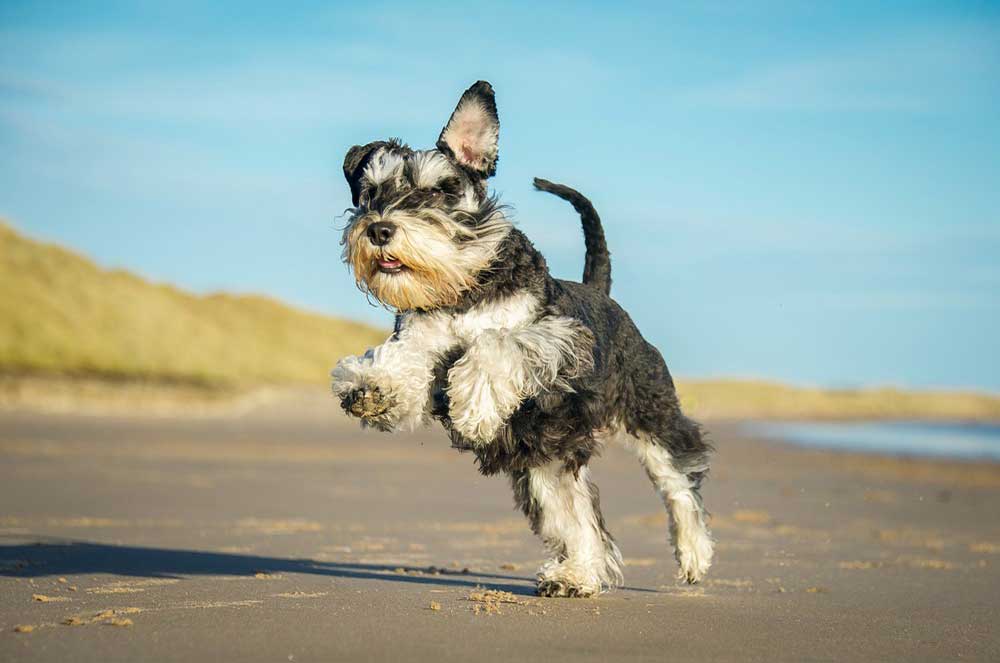 In the last decade, Schnauzers have become an incredibly popular dog breed for adoption. They’re kind, loyal, perfectly sized, barely shed, and have that funny little beard and such soulful eyes. So, if you’re considering adding this wonderful canine to your family, you’ll likely be interested in our list of 10 interesting facts about Schnauzers. Keep reading to discover what these schnauzers are all about!

Here’s one of the fun Standard Schnauzer facts that you probably didn’t know—it was bred in South Germany in or around the 14th or 15th century. We know this because it was illustrated by several pieces of art, including:

According to the American Kennel Club:

During the long centuries before mechanized agriculture, the world’s farmers strove to breed versatile dogs to use as all-purpose helpers. The farmers of different regions found diverse solutions to the same challenge, resulting in such varied breeds as the Kerry Blue Terrier (Ireland), Rat Terrier (United States), and Belgian Tervuren. Germany’s entry in the quest for an ideal farm helper was the dog breed that would come to be known as the Schnauzer.

The standard schnauzer was bred to be used for three purposes:

The word schnauzer originally comes from the German word schnauze, which means snouter. This was clearly referencing the dog’s square and uniquely whiskered snout, which separates its phenotype from many other dogs. But this wasn’t what they were originally called. In fact, for the first four centuries of their being, they were referred to as the Wire-haired Pinscher.

In 1870, Dog showing became popularized in Europe. The distinct mustachioed look of the Wired-haired Pinscher made it a standout on the scene, which led to fanciers renaming the breed Schnauzer to highlight its distinctive whiskered snout.

#4 They were Miniaturized in the 19th Century

Want some fun facts about Miniature Schnauzers? Well, the Standard Schnauzer was first miniaturized in the 19th century by mixing them with the Affenpinscher. This was done to make a more house-appropriate and cost-effective version of the regular schnauzer—one that still had all the enviable qualities of its larger cousin. According to sources:

The Miniature Schnauzer was exhibited as a distinct breed as early as 1899. It’s thought to have been derived from breeding the smallest of the Standard Schnauzers with Affenpinschers, gray Spitz, and black Poodles in a highly selective breeding program. Four Miniatures imported by Mrs. M. Slattery of the Marienhof Kennels in 1924 were the foundation stock for the breed in America. Miniature Schnauzers were first registered as a separate breed in 1926. The following year the first American champion was Mrs. Slattery’s Ch. Moses Taylor. This was an honor shared with Don v. Dornbusch since both won on the same day – but at different shows.

#5 They Have an Amazing Family Tree

As illustrated in the American Kennel Club’s 2003 issue, the Schnauzer has an illustrious and expansive family tree:

#6 The Giant Schnauzer was the Last of the Breeds

Known as the riesenschanuzer, which translates to Giant Snouter, this breed was likely mixed with the black Great Dane to make it an even better cattle, sheep, and guard dog. In 1928, E. Von Otto wrote a book called “German Dogs in Word and Picture.” According to the Giant Schnauzer Club of America (GSCOA), Otto lovingly referred to the giant’s patriarch as the Great Bear Schnauzer of Munich. He wrote:

To make his hair shorter and his body larger and black, the breed was crossed with the black Great Dane, by which it gained in power… and acquired above all the discretion of the protecting dog… in his general appearance and wonderful nature, he bears a very strong resemblance to the Bouvier des Flandres.

The Bouvier Des Flandres was another cattle breed that was noted for its strength, intelligence, and versatility. Although it wasn’t a popular show dog, it became much beloved as a working dog and a steadfast guardian.

Compared to other canines, the Schnauzer is an incredibly fit and robust breed. On average, a Standard Schnauzer is expected to live anywhere from 12 to 14 years, which is nearly double the expected lifespan of many similarly sized dogs. According to Pet MD:

The Standard Schnauzer, which has an average lifespan of 12 to 14 years, does not suffer from any major health conditions but is susceptible to minor problems such as canine hip dysplasia (CHD) and follicular dermatitis. Veterinarians will often recommend hip exams and even hip x-rays for this breed of dog. Both types of inherited diseases do pose health concerns but can be managed accordingly and easily recognized given their outward signs.

The miniature schnauzer is more prone to serious genetic diseases but is still a long-lived breed. Per Pet MD:

The Miniature Schnauzer, with a lifespan of 12 to 14 years, sometimes suffers from health problems like mycobacterium avium infection, cataract, and retinal dysplasia. Other major health issues that may affect it are urolithiasis and progressive retinal atrophy (PRA), while some minor health problems include von Willebrand’s disease (vWD), myotonia congenita, Schnauzer comedo syndrome, and allergies. A veterinarian may run DNA or eye exams to identify some of these problems. Like any other breed of dog, Schnauzers may experience specific symptoms related to inherent conditions. As an owner, it is important to pay attention to any signs.

Schnauzers are known for being headstrong and mischievous; however, they make fantastic guard dogs because of their loyalty, protectiveness, and aggressive nature. Once adopted, they are devoted to their human family and get along well with both children and pets.

Over the years, there have been various reports of them warding off intruders, be they human or animal. In fact, a Miniature Schnauzer named Cash was caught on video chasing a black bear away from his owner’s driveway.

#9 They Have Standard Colors

If you’re a football fan of the Oakland Raiders, you may need to get yourself a Schnauzer since you have the same standard colors! The robust, heavy-set dog will typically have a hypoallergenic coat  consisting of the following colors:

On rare occasions, you may encounter a schnauzer that also has shades of beige or brown in its coat.

The useful breed played an important role in the German army during the First World War, especially those of the Giant variety. They served as guard dogs and aids to doctors in the Red Cross. In addition, they became popular police dogs. According to this report:

Not until just before World War I, when their numbers were greatly decreased during the fighting, did the Giant Schnauzer begin to come to nationwide attention in Germany as a suitable subject to receive police training at the schools in Berlin and other principal cities. He proved such an intelligent pupil that police work has been his main occupation since that time.

The first of the Giants was imported to the U.S., likely in the ’20s and ’30s by German immigrants. Soon, both American police forces and army forces were adding the large and highly intelligent breed to their ranks.

If you have a Schnauzer, you should be happy to know that you have one of the best dog breeds ever created. They’re loyal, intelligent, and incredibly vigorous. Treat them well and they’ll be yours for life.

Do you want your Schnauzer to be strong and healthy? Of course, you do! Therefore, it’s crucial that you train them, exercise them regularly, and feed them the best food for Schnauzers. Lucy Pet can help you with the latter. We have precisely-formulated a natural kibble that contains all of the building blocks necessary to ensure that your schnauzer is fit and ready to work or play!

We too want your Schnauzer to have a wonderful, healthy, and happy life.