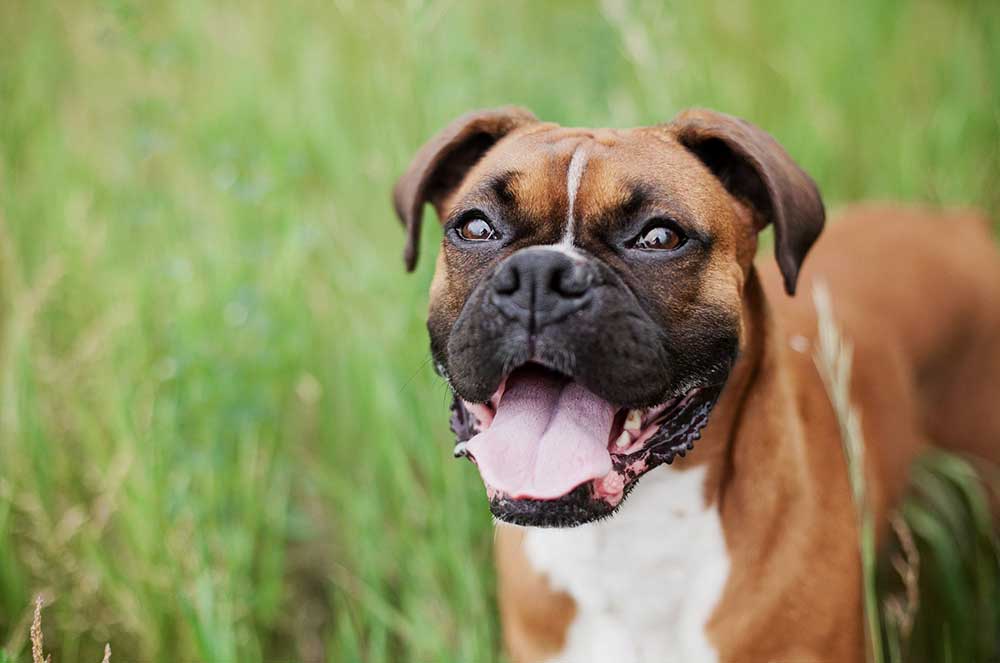 Dogs are resilient. They have incredible immune systems, they possess hyper-athletic physiology, and they have an incredibly high tolerance for discomfort. A dog’s ability to rebound from minor illness and health problems is truly extraordinary, and it is no more identifiable than in the Boxer breed. A boxer is a physical specimen, even by comparison with other dogs. The boxer dog breed is as athletic as dogs get while still being sweet, obedient, and playful (read more fun facts about boxer dogs).

However, as is the case with most purebred dogs, boxers are prone to certain health problems. In this article, we will look at the most common health issues in Boxer Dogs and discuss the severity and potential treatments to ensure your dog’s health.

The first major health issue that most dog owners should be aware of is degenerative myelopathy. This debilitating condition affects the nervous system and lower spinal cord and eventually leads to partial or full paralysis of the lower limbs.

Due to its effect on the lower part of the dog’s body, the disease will often begin with symptoms as mild as clumsiness making it appear that your Boxer has just forgotten how to walk. These sudden unexplainable bouts of clumsiness will be few and far between to begin, but any sign of paralysis in the hind legs should serve as a warning sign.

Unfortunately, there is no cure for degenerative myelopathy, as it is a debilitating nerve disease with irreversible effects. Even still, rapid action and treatment is a necessity for keeping your Boxer as healthy and happy as possible. Things like canine wheelchairs, kinesiology tape, and certain kinds of prescribed medicines from the vet can help your Boxer pet lead a life that is as close to normal as possible.

If you notice any regular bouts of clumsiness or temporary paralysis in the hind legs, it is imperative that you take your Boxer in to be checked for degenerative myelopathy. If you fear your Boxer may be suffering from this disease, your veterinarian will be able to help with a proper diagnosis and treatment plan.

Boxer Cardiomyopathy is a canine heart condition that is more prevalent in the boxer dog breed than any other breed of dog. While other dogs are just as susceptible to developing this kind of heart condition, due to their genetic makeup boxers are at high risk for this disease.

Boxer Cardiomyopathy prevents your Boxer’s heart from pumping blood effectively to the rest of the dog’s body. Characterized by an irregular heartbeat and fainting spells, boxers affected by cardiomyopathy are often at high risk of sudden heart failure.

Most boxers who suffer from Boxer Cardiomyopathy begin to show symptoms of the disease at two years of age or earlier. There are plenty of treatment options for BCM, and so long as the disease doesn’t go undiagnosed, your Boxer puppy will be able to lead a relatively normal life.

Complications can arise as a result of waiting, so it is always a best practice to consult your Vet as soon as you notice any health problems in your dog. Symptoms like heavy wheezing (not during exercise), fainting, coughing, and an irregular heartbeat could all be indications that your Boxer is suffering from Boxer Cardiomyopathy. Take preventative action and visit your Vet for a professional diagnosis and treatment plan.

While we may not think of bloating as a big deal for humans, in dogs, and especially with boxers, Bloat can be a severe condition with detrimental effects on your dog’s health. Bloat is a more common name for a condition called gastric dilation, wherein the gastrointestinal system swells, preventing digestion of food and passage of stool.

The most common cause of Bloat is simply overeating, which Boxers are prone to do. Overeating causes the stomach to be overfilled, which tells your dog’s body to produce an excess of stomach acid in an attempt to break down the food. The result of excess food combined with excess stomach acid is rapid inflammation and Bloat.

In some severe cases, Bloat can require surgery. Bloat can cause the stomach muscles to twist on themselves, which prevents blood flow to the stomach and spleen. If this goes without treatment, it could be catastrophic for your Boxer. Even in more mild cases of Bloat, uncomfortable methods of extraction are often employed. Most commonly, a vet will stick a tube down your dog’s throat to clear the excess food and inflammation manually.

The best treatment for Bloat is to avoid it altogether, and Bloat can easily be managed by you as an owner. Simply control how much you are feeding your Boxer, and be sure to avoid overeating. Most Boxers are susceptible to massive appetites, and they require large amounts of caloric intake daily. Your dog’s diet should be multiple small meals throughout the day to avoid gastric issues like Bloat.

As a superior athletic specimen, mobility is key for your Boxer. Hip dysplasia is one of the biggest long term threats for the health and well being of the Boxer dog breed. This degenerative joint condition is a genetic malformation wherein the hip joint does not properly fit into the hip socket. The discord between joint and socket creates a painful sensation wherein your Boxer is limited in his mobility.

When the hip joint does not properly fit inside the hip socket, as is the case with hip dysplasia, your dog’s body is unable to move the way nature intended. Activities like walking become a chore, while fun activities like running and jumping become downright impossible.

Usually, symptoms of hip dysplasia are evident within the first several years of your Boxer puppy’s life. However, hip dysplasia becomes more of a risk the older your dog gets. If left untreated Hip dysplasia can lead to other joint conditions like lameness and arthritis.

Typically, hip dysplasia is treated with a long term medication plan to control inflammation and pain. It is important to find exercises that do not exacerbate your Boxer’s condition while still allowing him to be active and mobile. If your Boxer is severely limited in his mobility, you may be interested in looking into canine physical therapy, which can help your dog in their pursuit to learn new ways of moving.

Seizures may be one of the most frightening medical episodes to watch your Boxer endure, but they are an unfortunate reality for boxer owners. The same thing that makes your Boxer a lovable bundle of renewable energy is the very cause of potential seizures, their brain.

While there are several different classifications of canine seizures, most commonly boxers suffer from Grand Mal Seizures, which are classified as a seizure that affects the entire dog’s body and all four limbs. Most commonly, and especially in boxers, these types of seizures are brought on by Idiopathic Epilepsy.

Idiopathic epilepsy refers to a single or series of epileptic episodes that have no apparent cause. These epileptic fits stem from some unknown genetic malformation of the brain, and this type of epilepsy is found in large dogs and boxers.

Additionally, Boxers, especially those with heart conditions, are susceptible to seizures because of their increased energy levels. The high heart rate and elevated blood pressure that is a normal part of a Boxer’s anatomy put this particular breed at greater risk of seizing, seemingly out of nowhere.

While it may be scary, seizures are treatable, both in the moment and long term. In the moment, it is important to remain calm and allow your dog to seize. Your instinct will be to restrain your dog, but this action could cause more harm than good. Clear away the path of your seizing boxer, so they don’t hurt themselves on any foreign objects and wait for the episode to be over. Once the seizing has subsided, take your dog to your Vet immediately.

Seizing could be a side effect of some greater health risk, so it is always imperative that your dog is taken in for analysis after an epileptic event. There are medications and treatment plans that can help your Boxer cope with seizures and epileptic events.

The best way to keep your Boxer healthy and happy is with a good diet and lots of exercise. Your Boxer is full of natural energy, and his excitement to run and play will likely outlast your enthusiasm and energy levels. Nonetheless, it is imperative that you are constantly engaging with your Boxer.

Boxers are one of the most demanding breeds, not just as a result of how much energy they have, but how much energy they require in return. Even in spite of some of the health problems listed above, your Boxer will still have more energy and desire to be active than many other breeds.

Be sure your dog’s diet is balanced with food that has the nutrients he needs for a healthy lifestyle. Boxers require a calorie-rich diet of fats, proteins, and carbohydrates to match their high metabolism. Between a well-balanced diet and an active, healthy lifestyle, even the most common health problems won’t slow your Boxer down.