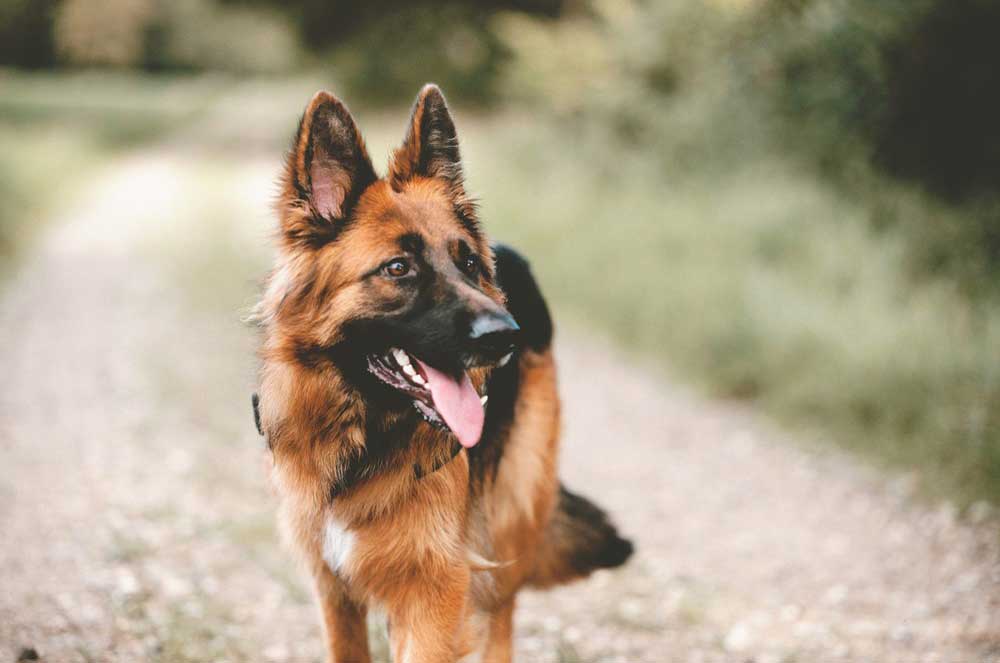 Owning a German Shepherd dog is a gift that keeps on giving. They are loving and faithful guardians who will fill your life with joy and laughter. However, as an owner, you must ensure that your German Shepherd is fit and healthy. That starts with regular exercise and a healthy diet. In addition, there are certain German Shepherd health issues they’re predisposed to that you should be aware of. To further understand the breed holistically, it’s best to be knowledgeable of some. Below, we’ll discuss the most common German Shepherd health problems so that you can be alert for the signs and be readily prepared to act when you spot them.

Hip dysplasia is one of the most common health issues. Unfortunately, due to their natural skeletal structure, they’re more prone to this degenerative disease than any other breed, with it occurring in 15% to 20% of the entire population. It can first manifest when they are puppies or develop later on in life, largely due to a combination of three issues:

Hip Dysplasia occurs due to subluxation of the femoral head of their hip bone. This causes the hip joint to become too loose, which leads to a partial dislocation in the ball and socket. Naturally, this puts a strain on the area, causing the following issues:

Unfortunately, this painful problem will severely impact your dog’s health and ability to perform normal activities. Signs you want to be on the lookout for include:

Preventative measures you can take include a healthy diet, plenty of rest, and physical therapy. But, if the condition is advanced, your veterinary practitioner will likely recommend they undergo one of three surgical procedures:

This may impact your dog’s ability to defecate since it can be incredibly painful, particularly when infected. Signs of this malady include:

If you see the signs, you must seek veterinary care for your German Shepherd immediately. Depending on your dog’s body and severity of the condition, mild cases can be treated with cyclosporine and ketoconazole, as well as a hypoallergenic dog food diet. More severe cases may require surgery to rid the infected tissue around the anus.

Degenerative myelopathy (DM) is a progressive disease that causes degeneration in the spinal cord of older dogs. It typically occurs in German Shepherds that are 8 years or older. As degeneration occurs, the first sign your pup may exhibit is known as ataxia, which is a loss of coordination in their hind limbs. This is soon followed by worsening symptoms such as:

Within 6 to 12 months of onset, the disease results in paraplegia of the hind limbs, which leads to further issues such as urinary and fecal incontinence, and an inability to move. According to the Canine Genetic Disease Network:

Degenerative myelopathy begins with the spinal cord in the thoracic (chest) region. If we look under the microscope at that area of the cord from a dog that has died from DM, we see degeneration of the white matter of the spinal cord. The white matter contains fibers that transmit movement commands from the brain to the limbs and sensory information from the limbs to the brain. This apparent degeneration in the dog’s body consists of both demyelination (stripping away of the insulation of these fibers) and axonal loss (loss of the actual fibers). It interferes with the communication between the brain and limbs.

Recently, studies have discovered that there is a specific genetic mutation that can greatly impact a German Shepherd’s predisposition towards the disease. Sadly, there are no treatments for stopping or even slowing DM. It’s fatal, so the only thing you can do is shower them with continued love and affection, and chew toys to ensure that they’re as comfortable as possible in their final days.

A German Shepherd’s pancreas will regularly release enzymes meant to ease digestion. In a healthy dog, those enzymes aren’t activated until they reach their intended destination; the small intestine. However, for dogs with pancreatitis, those enzymes activate earlier than intended, resulting in inflammation that damages the pancreas and local organs. Naturally, this can lead to a host of serious health problems.

Researchers remain uncertain about why pancreatitis occurs, but they know that certain things exacerbate it such as:

The early signs of pancreatitis are not typically noticeable, which means they’re easily explained away as a less serious condition. That said, you should be aware of the more common signs of the disorder as noted by the VCA:

Mild pancreatitis can be treated by rest and a low-fat diet. More serious cases may require veterinary care whether it be by hospitalization, monitoring, and IVs for both fluids and medications. Fortunately, most German Shepherds recover without any long-term consequences.

Urinary tract infections (UTIs) are the most common infectious disease in dogs, regardless of breed. They can occur for a variety of reasons but are most typically caused by bacteria entering the urinary tract through their genitals. According to the American Kennel Club:

Most dogs get UTIs when normal skin and gastrointestinal (GI) tract flora get past the urinary tract’s defenses. These bacteria then colonize the urinary tract, leading to an infection. E. coli is the most common bacterial cause of UTIs, but quite a few bacteria and even some fungi can cause infections for your pet.

Female German Shepherds are far more predisposed to this issue than males, though it still does occur. Also, a weakened immune system can increase the rate of occurrence. UTIs produce several symptoms that you need to be on the lookout for, including:

Left untreated, this can create further problems such as:

That said, if you take your German Shepherd to the vet early on, they can typically fix a UTI by prescribing canine antibiotics.

PRA is an inherited degenerative disease of the retina that impacts the photoreceptors in the back of the eye. It causes the rod cells in the retina to die out over time, resulting in major eye problems such as blindness.

The first symptoms you may notice include:

If caught early on, it can be treated with a specific daily antioxidant supplementation. Without that, all dogs diagnosed with PRA will be blind within 12 months of diagnosis.

Sadly, German Shepherds are more susceptible to cancers than most dogs, particularly as they get older. The most common cancers include:

The signs, symptoms, and treatments for each cancer differ, so it’s paramount that you regularly take your German Shepherd for checkups and seek excellent veterinary care.

Taking Care of Your German Shepherd

If your dog’s health is one of your primary concerns, there are preventative steps you can take. This includes regular exercise, rest, and a healthy diet. Fortunately for you, Lucy Pet can help you with that latter. Our natural kibble is precisely formulated and packed to the brim with all of the nutrients a healthy dog needs—ensuring that your German Shepherd eats a balanced and nutritious selection of throughout its life.