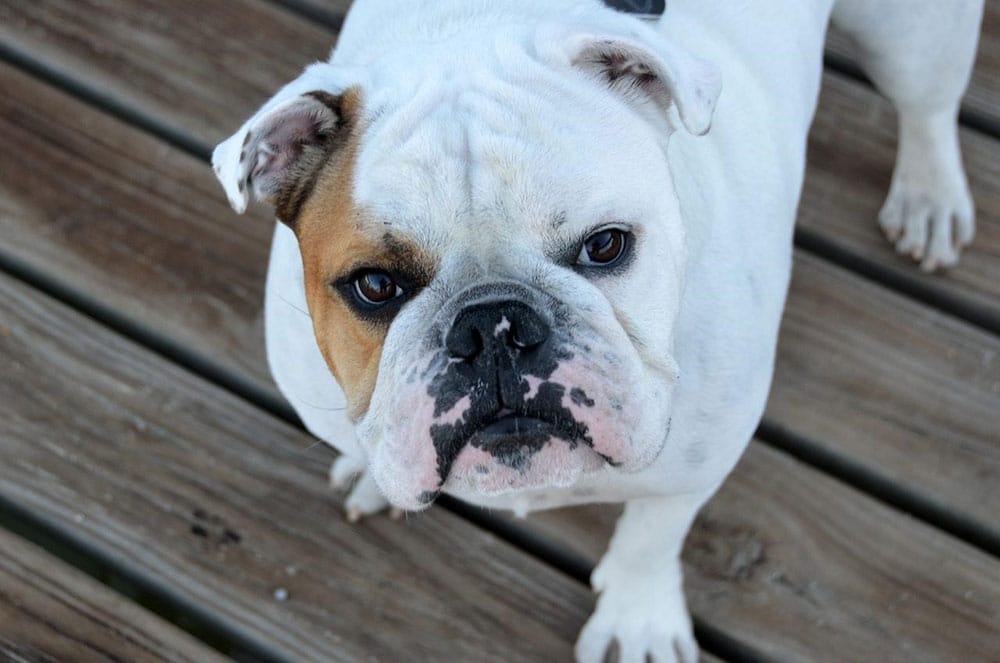 “Don’t judge a book by its cover” should be the trademark of the English Bulldog. Never has the look of a breed been so contrary to its demeanor: for under the almost-stern, always frowning face of an English Bulldog lies a warm, friendly, amiable dog!

As the 4th-most-popular dog breed in the United States, there is clearly a lot to love about the English Bulldog. To further acquaint you with this particular breed of man’s best friend, let’s look at 10 English Bulldogs facts that will help you decide if this breed is meant to be your new favorite family member.

1. Bred for a Purpose

To fully understand the English Bulldog breed—both in temperament and in physicality—we need to frame our information in history, specifically in how the breed came to be so distinctive. So off to brutal Medieval England we go!

It’s the Middle Ages: What to do? Enter the barbaric sport of bull baiting, where specially-trained dogs would one-at-a-time attack a bull. The winning dog was able to fasten his teeth firmly in the bull’s snout and not be shaken loose.

As this “sport” gained popularity and became the main means of gambling, English Bulldog owners recognized the need for better and more-efficient dogs to win matches. And thus began breeding for a purpose—with no regard for pedigree, natural bloodlines, or for the general health and well-being of the breed.

It was during this time that the following characteristics were bred into the English Bulldog:

Mercifully, an Act of Congress in 1835 outlawed the barbaric blood sport; but sadly, the English Bulldog breed would never be the same. And now with a bit of historical reference in your mind, you’ll be able to see how such drastic altering of this dog breed produced some of its most notable characteristics, for better or for worse.

There are few things more annoying than a dog’s yipping, jumping, scratching greeting that lasts the entire visit. “Pet me, pet me, PET MEEEE!” just isn’t in the English Bulldog’s demeanor. Instead, count on your guests either to be ignored by your stout companion or simply be given a quick sniff before your bulldog heads back to his bed.

But don’t mistake the English Bulldog’s lack of enthusiasm for standoffishness: they are extremely people-oriented dogs. Known for being unbelievably gentle with children and with other dogs, English Bulldogs are perfect family pets. Just know that while affection is always welcomed and returned, you may find yourself being the initiating party of said affection. Doesn’t mean you’re in the doghouse though!

If you are someone who enjoys being a couch potato, English Bulldog are the ideal companions. Don’t be surprised if your Bullie passes gas while you sit and watch TV together.  Yes, Bulldogs are known for being gassy. Choosing the right food is important for a healthy digestive system.

Dogs and water make a great pair, right? Well, not exactly in the case of the English Bulldog. If you have a pool or are a seafaring type of person, be aware that your bulldog is not a fan of the water, nor can the breed swim very well.

Keep in mind that your muscle-bound, short-legged friend may sink like a stone, so be sure to keep a watchful eye on him around water. And if your bulldog doesn’t possess the natural aversion to water, you may want to invest in a doggie life vest for him. Just as with water and small children: safety first and general watchfulness is ALWAYS the order of the day!

4. Need Encouragement to be Active

Ahhh, glorious laziness! English Bulldogs can easily sleep 22 out of the 24 hours in a day… if you let them. So, if you’re used to having a dog that sprints to the door every time he hears your keys jingle, then it’s time for a doggie paradigm shift.

The good news is that English Bulldogs need very little exercise, only about 20-40 minutes per day. The bad news is that they are not inclined to exercise at all. This is where you will need to get proactive: treats, enthusiasm, and tough love will be your new arsenal of choice to coax your friend into that leash.

A spirited game of ‘fetch’ may or may not happen, which is the mindset of the lovable, leisurely English Bulldog. In the cerebral way he (or she) watches the ball land, then looks at you knowingly as if to say, “I’m not going to get it. If you want it so badly, you shouldn’t have thrown it,” you may just find your new soulmate.

If you are looking to be a first-time dog owner, then the English Bulldog is a great segue into your new role as a pet parent!  Some highlights of the breed regarding novice pet owners are these:

English Bulldogs are generally obedient, eager-to-please, and easily trainable. What is sometimes perceived as stubbornness in the breed is really a thoughtful nature that trainers attribute to their “look-before-you-leap” cleverness.

Not only can Bulldogs be left alone for long periods of time, they have an innate intelligence that allows them to problem-solve better than some other breeds who may look to the owner for help. And in this regard, you may find yourself falling a bit more in love with the breed.

The freedom that English Bulldogs offer by way of their independent and easy-going personality will most certainly be balanced by their initial expense (an average $1000+ price tag per puppy from a reputable breeder) as well as by a daily routine to keep them healthy and happy. Alternatively there are Bulldog rescue groups to adopt a Bullie, so check your local community shelter or website groups.

Because of their compact facial structure, English Bulldogs tend to have breathing issues that are exacerbated by hotter climates. Even a short walk in the heat could cause excessive panting, wheezing, and shortness of breath.

Likewise, colder climates offer their own set of perils. Though a muscle-bound breed, the English Bulldog has very short, thin hair that offers no protection from the cold. The padding on their feet, as well, is very prone to frostbite in icy and snowy conditions.

If you’re reading this, and you live in the intemperate North or South—don’t worry; attentiveness and caution will be your guide. In the case of either extreme heat or extreme cold, just be sure your English Bulldog does not remain outside for longer than 15 minutes. And as with any dog, be sure there is plenty of fresh cool water available in the heat; and be sure to completely dry them off if they have gotten wet from rain or snow.

9. Tend to be Plagued by Medical Issues

Next, we’d like to arm you with knowledge of the possible—not probable—English Bulldog health facts. But rest assured: this is simply an overarching informational list of known issues. Your new dog may live a long, worry-free, and healthy life!

Which English Bulldog is Right For You?

So now that we’ve given you an overview of English Bulldog facts and information, it’s time for a little personal inventory! Are you active, vivacious, ready-to-go at a moment’s notice, always looking for your next physical challenge? And are you looking for a furry companion to join your jet-setting lifestyle? Then the “newer” Old English Bulldog is the breed for you.

BUT if you are a laid-back, somewhat-attentive caregiver, given to an easy-going temperament, love quiet evenings of relaxation, and want the perfect placid sidekick? Then look no further than the amiable, wrinkled, mellow traditional English Bulldog.