What’s Up With Those Cat Eyes!?

Previous Next
What’s Up With Those Cat Eyes!? 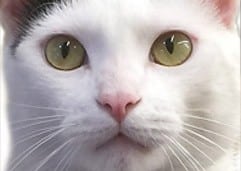 Do you ever look at your favorite feline and wonder why the pupils in their beautiful cat eyes are vertical slits instead of the round pupils we have as humans? Maybe you’ve wondered why large cats, such as tigers, have round pupils but house cats don’t. Evolution has created them this way, so let’s find out why!

A study in Science Advances suggests those animals with vertical slit pupils are more of an “ambush predator”, compared to animals with round pupils who are more “active foragers”. The difference between the two might be slight, but their eyes open the door to many other answers.

Domesticated cats need their vertical slit pupils to help them see in dim light, it gives a boost of vision during the break of dawn hours. But it also restricts the amount of light they receive during the brighter parts of the day. This is important for the animals to be able to hunt prey at any time of the day or night (even if the “prey” they are trying to hunt is that toy mouse you regret buying at four in the morning when your precious Jasper is playing under the bed).  This type of pupil shape also allows the animal to better judge distance and speed of whatever they’re hunting.

Large, wild cats, such as the previously mentioned tiger, need a round pupil that can fully contract and expand in order to go from a hiding and hunting position to a full in the light attack stance. It’s also thought that the height of the tiger also lends itself to not need the vertical slit, and what these animals really need is the ability to see more with their peripheral vision.

Whatever the reason that your beloved kitty needs their specifically shaped pupils, it’s important to keep their eyes clean. If you notice any change in eye discharge, cloudiness of the eye, or swelling of the eyelid, you should bring them to a vet to have them checked out!