Can Your Dog Surf? Find Out on the Ford-Powered Lucy Pet’s Gnarly Crankin’ K9 Wave Tour 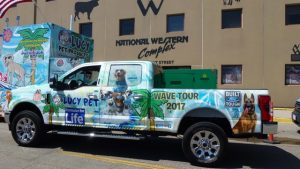 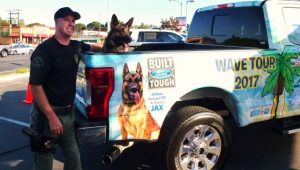 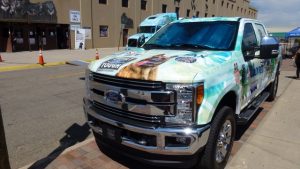 DEARBORN, Mich., Sept. 6, 2017 – Ford and Lucy Pet are giving pet owners the chance to see if their furry friends can “hang ten” with professional surfing dogs and cats at a number of Bark at the Park and other events through the fall.

Along the way, the companies will also honor some of the country’s toughest service dogs, like Jax, a proud member of the Oxnard, California, Police Department K9 unit, who is featured on the Ford Super Duty F-250 that’s part of the tour.

The Wave Maker was the centerpiece of Lucy Pet’s record-setting 2017 Rose Parade float powered by Ford. Many of the dogs who surfed in the parade will perform at the Wave Tour stops, as will talented newcomers including Macho, the only terrier who pops balloons while surfing, and Ricky the rescue cat who surfs with his best friend, Coppertone the dachshund. Event participants are welcome to see if their pets also can catch a wave.

“It takes a big generator to create waves in 5,000 gallons of water, and a lot of horsepower and torque to tow that generator from one location to the next,” says Joey Herrick, president, and founder, Lucy Pet Products. “That’s why we went with America’s undisputed tow leader, the Ford Super Duty. We’re also relying on Ford Transit vans and an RV built on a Ford chassis to transport our stars and their human trainers.”

The Lucy Pet Wave Tour Powered by Ford is scheduled to make the following appearances:

Lucy Pet is a family-owned and operated pet produce business based in Thousand Oaks, California. Proceeds from the brand directly fund its 501 (c) (3) non-profit Lucy Pet Foundation. The foundation’s mission is to reduce pet overpopulation and the euthanasia of over 80,000 dogs and cats per week in the United States. Learn more at www.lucypetproducts.com and www.lucypetfoundation.com. 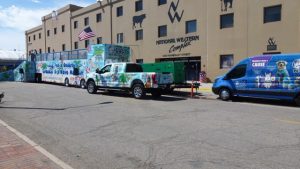 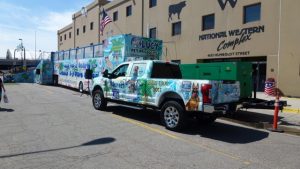